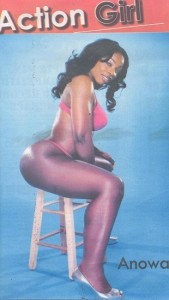 Kaliati said such publication is demeaning to women and that it makes young girls and women even more vulnerable.

She said this at the official launch of the Malawi Child Protection and Gender Media Network which was held at Cresta Hotel with support from Plan Malawi on February 17.

“Why pay a girl child to pose in the nude? What a shame? How would you feel to see your daughter or sister exposed like that?” asked an irate Kaliati, holding a copy of the publication.

The minister asked the journalists in attendance to fight and push for the removal of ‘Action Girl’ which she said encourages abusive tendencies in society.

Kaliati also hailed journalists for the initiative which goes a long way to expose abusive practices and act as a call for action on such matters. She also assured journalists of government’s support.

She also expressed her gratitude to Plan Malawi for their support in different government development endeavours.

On his part, Enock Chibwana, chairman for the network applauded Plan Malawi for the gesture.

“We appeal to government not to leave us alone. And Plan Malawi don’t leave us on the way.” Said Chibwana.

Regional Communications and Media Relations Manager for Plan, Regis Nyamakanga said his organisation believes in the power of the media and asked journalists to create non-exploitive content and bring various issues of abuse to policy maker’s attention.

Commenting on the event, Kara Stevenson, a Canadian journalist working with Journalists for Human Rights (JHR) said she feels the launch is a big step for Malawi.

In attendance was the chairman for the Media Council of Malawi, Patrick Semphere, and Nsanje North Parliamentarian, honourable Viyazi.

One body found in Nsanje in boat accident

One body found in Nsanje in boat accident

ZAMBIA - A Rwandese woman in Kafue District has...

In a modern day Bonnie and Clyde classic, two...

Milk has been gotten a kick out of all...

Some Malawian nationals are stranded in Zimbabwe as the...
FaceofMalawiNEWS