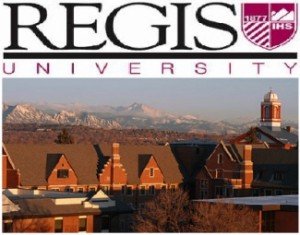 Regis University in Denver is taking the lead on a program to teach online college courses in refugee camps in Malawi and Kenya, and in urban Syria. The four-year pilot project is called “Jesuit Commons: Higher Education at the Margins” and it aims to solve a stark problem: the dearth of higher education options for refugees.

Speaking to an audience in Regis’s bright chapel this morning, senior United Nations official Vincent Cochetel praised the program. Wearing thin-rimmed glasses, a plain gray suit and speaking in a thick French accent, Cochetel said the U.N. does a poor job of providing education; only 4 percent of the budget for the United Nations High Commissioner for Refugees, the agency that protects refugees worldwide, is dedicated to education. The U.N. needs to better support efforts by outside entities, he said, adding, “This project is setting a very good precedent.”

Started in 2010, the project’s goals are lofty. Many of the world’s eleven million refugees don’t have access to good primary and secondary education, let alone college. But for those who do have the background to take college courses, there are few opportunities. How many refugees is that? Cochetel says the U.N. doesn’t know. Not many universities have scholarships for refugees and most don’t recognize degrees from developing countries. The solution, he said, may lie in distance learning projects like Jesuit Commons, in which refugees can take courses from universities in developed nations.

Clotilde Giner is the site coordinator for the Jesuit Commons program in Dzaleka refugee camp in Malawi, which is a temporary home to 18,000 refugees from the Democratic Republic of Congo, Rwanda and Burundi. In a building powered by solar panels, about sixty students take online courses on donated computers. The professors are from several Jesuit and non-Jesuit universities, including Regis. They volunteer their time to teach liberal arts courses such as philosophy, math and business.

In the 85,000-person Kakuma refugee camp in Kenya, sixty refugees from myriad countries, including Ethiopia and Somalia, take courses in a building powered by a generator, according to site coordinator Luis Amaral. In both locations, Internet service is spotty and slow, but the programs make it work with the help of on-site tutors.

Both sites also offer what the program calls Community Service Learning Tracks, which are vocational-type courses in areas such as psychosocial case management, sustainable gardening, tutoring and journalism. In Malawi, Giner says the refugees have helped develop them based on their community’s needs. “It’s a good way to show the refugees that we take into account their talent,” Giner says.

The 120 refugees taking online college courses have the opportunity to earn a diploma from Regis. The courses, which equal 45 total credits, take three years to complete. Since the program has only been up and running for two years, no one has graduated yet, but those involved already see the benefits. “Their fortitude to stick with it is amazing,” says Roxanne Gonzales, Regis’s academic dean for the college of professorial studies. “For the learners who take part in it, it truly is a gift for them.”