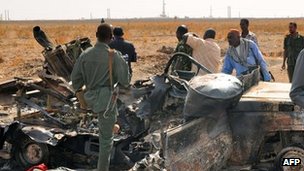 The African Union has demanded South Sudan withdraw its troops from the Heglig oilfield, in Sudanese territory.

Fighting has continued for a second day between Sudan and South Sudan in the disputed border regions.

The AU says it is deeply alarmed and called on both sides to exercise the utmost restraint.

Khartoum says it is withdrawing from negotiations with South Sudan and has complained to the UN and the AU about South Sudan’s “aggression”.

A military spokesman for South Sudan told the BBC his troops were coming under aerial bombardment north of Heglig.

The BBC’s James Copnall in Khartoum says that Sudan relies on the oilfield for a sizeable part of its budget.

Sudan has vowed to use “all legitimate means” to retake the oil fields, and has warned of “destruction” in the south.

The fighting is the most serious conflict between the neighbours since South Sudan seceded in July last year.

In January, land-locked South Sudan, which depends on oil sales for 98% of its revenue, shut down all of its oil fields in a row over the fees Sudan demands to transit the oil.

A presidential summit, which was to have been held in South Sudan’s capital, Juba, at the beginning of April, has been postponed indefinitely because of the recent violence.

“We cannot talk about peace while there is an aggression,” he said. “If they want peace, they have to pull their forces from the territory of Sudan.”

“We pursued them up to Heglig,” he said. “We think this is our right.

In a statement, the African Union called upon both countries to resolve this and all other outstanding issues “in a peaceful way in accordance with the overriding principle of establishing two viable states in Sudan and South Sudan”.

Correspondents say Sudan, having lost most of its oil when the south seceded, will not tolerate losing any more.