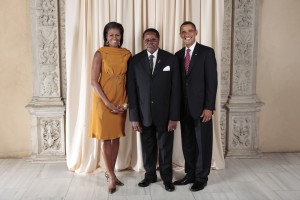 Brother, can you spare a dime?

This sentiment from one of the most famous American songs of the Great Depression largely characterized the donor-recipient relationship between the United States and Africa throughout much of the Cold War and its aftermath.

Last month, Senator Dick Durbin (Democrat-Illinois) and his colleagues in the House, Chris Smith (Republican-New Jersey) and Bobby Rush (Democrat-Illinois), introduced “The Increasing American Jobs through Greater Exports to Africa Act” that seeks to put trade and investment at the center of U.S. relations with Africa.

It cannot happen too soon.

President Clinton initially moved U.S. policy in this direction when he signed the African Growth and Opportunity Act (AGOA) into law in 2000.

AGOA was intended to contribute to poverty reduction in Africa by promoting light manufacturing and trade with the U.S.

President George W. Bush strengthened the legislation three times during his time in office. Under the legislation, 40 African countries are eligible to export up to 6,500 products to the U.S. duty and quota free, based on their commitment to economic and political reforms.

With the legislation’s enactment, some Americans began for the first time to look at African nations more for their commercial and partnership potential than as charity projects.

But 10 years later, AGOA is still a work in progress. Total two-way trade with Africa has more than doubled to U.S. $73 billion and Africa’s non-energy exports to the U.S. under AGOA, largely apparel but also machinery and automobiles, have tripled to $3.8 billion. AGOA has created an estimated 300,000 new jobs which are largely filled by women, a genuine and cost-effective contribution to poverty reduction.

The disconcerting reality is that the U.S. seems to have turned its attention away from Africa’s commercial potential at a time when many other countries have undertaken significant efforts to capture a share of that market. This lack of interest comes at a time when sub-Saharan Africa, next to East Asia, is the fastest-growing region in the global economy, the number of democracies has increased from three in 1998 to 23 in 2008 and a consumer class the size of India’s has emerged on the continent.

Other countries are paying attention to these positive changes and, not surprisingly, China is at the forefront. Its two-way trade with Africa increased from $10 billion in 2000 to $160 billion in 2011. China is not alone in these endeavors. Brazil’s trade with Africa has quadrupled between 2002 and 2010, and earlier this year, India increased its trade target to $90 billion by 2015. Turkey, Russia and Iran are increasing their commercial activity on the continent as well.

The European Union has embarked on an aggressive strategy to put in place new free trade agreements – known as economic partnership agreements (EPAs). With the EPAs, EU exports would have an advantage in Africa over exports from other countries and EU companies would receive preferential treatment over investments from the U.S., China, India and elsewhere. There are concerns that the EPAs would damage local industry and efforts at regional integration.

The Obama administration recognizes the importance of promoting U.S. businesses in emerging markets. Last month Secretary of State Hillary Clinton convened an unprecedented global business conference at the State Department to emphasize the connection between creating jobs at home and finding new markets abroad. Johnnie Carson, the Assistant Secretary of State for Africa, recently led a trade mission in the power sector to Ghana, Nigeria, Tanzania and Mozambique.

This does not seem to be a “whole of government” approach, however, since the U.S. is reducing its commercial presence in the African market. Over the last several years, the Commerce Department has closed offices or withdrawn personnel from Senegal, Ghana, Cote d’Ivoire and the consulates in Durban and Cape Town, South Africa. The Department’s flagship location in Africa, the Ron Brown Commercial Center in Johannesburg, has been closed and the last Commerce Secretary to visit the region was Don Evans in 2002.

In an effort to focus the Administration’s attention on the opportunities in the African market, the legislation introduced by Senator Durbin, a key Obama ally, and his Congressional co-sponsors, would triple US exports to Africa to $63 billion in the next ten years.

The legislation calls on the Obama Administration to develop what the U.S. has never had: a comprehensive strategy for enhancing U.S. exports and investments in Africa, coordinated by a senior official in the White House.

Among its other components, the legislation would raise limits for U.S. Export-Import Bank loans to compete more effectively compete with concessional, below-market loans used by the Chinese. The Foreign Commercial Service would be directed to restore its presence in U.S. embassies on the continent and the Secretary of Commerce to lead a trade mission to Africa within a year of the Act’s enactment.

If successful, this legislation will create an estimated 315,000 jobs in the U.S.

The Obama Administration would do well to embrace the Durbin legislation. There is no doubt about the residual good will for President Obama and the U.S. in most parts of the continent. Nevertheless, the U.S. is on the sidelines when it comes to the emergence of the African market. The U.S. can benefit from Africa’s emerging opportunities more than it has in the past and, increasingly, African nations have more options for commercial partners than ever before.