Chancellor College has categorically denied looting foodstuffs worth about K300, 000 from the cafeteria at the Catholic University of Malawi (Cunima) and has since asked for proof on the same. 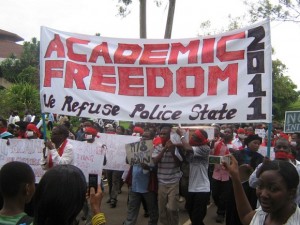 Students’ union president Patrick Phiri said on Monday in reaction to concerns from Street Wise Dealers, which was providing catering services at the time of the looting, over delays by Chanco to pay for the looted goods.

The caterers’ manager Precious Lipenga said in an interview over the weekend that despite making the claim in writing, not even a penny has been paid so far.

“Though I forwarded a letter through Catholic University claiming K300, 000 from Chancellor College to cover for the confiscated foodstuffs, nine months have elapsed now without getting anything positive. And being a business, this is worrisome,” Lipenga said.

He said each time he inquired about the matter from Catholic University, the responses were the same that “the issue is with Chancellor College.”

Catholic University’s Registrar Mr Mavumbe acknowledged writing Chancellor College on the issue but said as far as he was concerned, the matter is no longer in his hands.

But Phiri who is Chanco students’ union leader, while confirming receipt of the letter, said the claim could hardly be honoured unless it is established that it was really the students who looted the cafeteria.

“The information we got from the security officer points to the fact that there was of course some sort of a fracas but it has not yet been established if the looting was really done by Chancellor College students.

“Such being the case, it has to be established first if it is our students who did it before we start talking about the alleged looters contributing towards settling the claim,” Phiri said.

The staff at the said cafeteria are on record to have said that a group of Chancellor College students who had gone to Catholic University for sporting activities invaded the cafeteria, demanding food.

In the process they allegedly ransacked the cafeteria, looting cooked rice, beef, tomatoes and fresh Irish potatoes from the store room, plus cell phones of the cooks in the process.