Founder of the Joyce Banda Foundation International (JBFI) and former President of the Republic of Malawi, Her Excellency Dr. Joyce Banda was awarded the 2015 ‘Women of Distinction Global Leadership Award in Politics’ by Celebrating Women International (CWI).

The ceremony took place on Saturday, October 3, 2015 at the Atlantis Theatre, Paradise Island, The Bahamas. 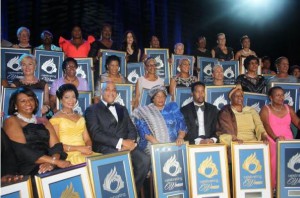 In her speech, Banda dedicated her award “to the women of Africa”, whom she described as “persevering and hardworking”.

Banda said through her own experience, she had observed that African women face many obstacles to acquire education, access modern antenatal and medical services and gender imbalances in their quest for leadership. She said for some time now, she has worked tirelessly to ensure that girls attain basic and tertiary education.

In this regard, she said she runs primary and secondary schools for the underprivileged children and said the current enrollment in these schools is at 3,500.

“Distinguished ladies, I also resolved that as long as I live, I will not tolerate incidences of women dying while giving birth because they cannot access modern antenatal services. During my time as President, I made sure that we construct holding shelters at many health facilities so that pregnant women can stay before giving birth. We discouraged pregnant women seeking traditional birth attendants’ services because it is simply unsafe,” said Dr. Banda.

She said women ought to support each so that they have a “fair representation at policy formulating tables”. She, however, cautioned women against sidelining men in any of their endeavours and aspirations, saying men and women ought to be “partners and work together to emancipate and empower women and the girl child”. 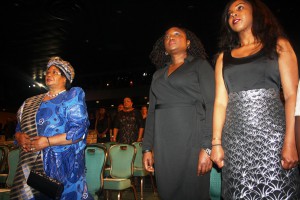 CWI is a group of prestigious women’s advocates in The Bahamas, Canada and the USA. Together, they form a team that has one common goal—to support women’s rights.

It was founded in 2013 as a subsidiary of The King Global Humanitarian Foundation (TKHGFI),a non-profit organization that aims at to “mobilize and inspire women across the globe; to honour, recognize and celebrate their achievements and leveraging their untapped leadership capabilities in order for them to thrive and lead productive lives”.

Gospel singer Cissy Houston, mother of the late Whitney Houston, was also recognized during the event.