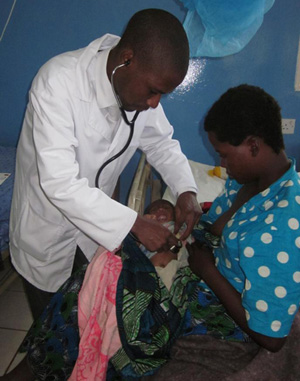 On May 26, Neno District Hospital admitted its first patients into a new Nutritional Rehabilitation Unit (NRU) — the first of its kind in the rural Neno district of southern Malawi.

The three young children admitted were all dangerously malnourished, reported Dr. Jonas Rigodon, PIH/APZU Country Director for Malawi. Previously, such cases had to be referred to a NRU in the neighboring Mwanza District, which is hours away for many of the patients served by APZU in the Neno district, added Dr. Rigodon.

In a country where roughly one in five children under the age of five is moderately or severely underweight, and over half suffer from moderate or severe stunting due to chronic malnutrition*, the APZU team believes that they will very soon be admitting many more children as the word of the new facility spreads. In addition to the Neno District, the new NRU will also likely serve patients in the neighboring Ntcheu District, as well as Mozambique, a country that borders Neno to the west.

The new NRU is part of APZU’s comprehensive Community-based Therapeutic Care (CTC), which identifies and treats malnourished children under the age of 12 in the district, as well as pregnant and lactating mothers. The other components of CTC — community outreach, out-patient therapeutic care, and supplementary feeding — bring services even closer to patients, allowing for better access to health care for those most in need.

“The components are designed in a decentralized manner, with multiple distribution points,” explains Dr. Rigodon.

Village Health Workers play a vital role in supporting CTC. They provide community outreach services, which include sharing information about malnutrition with their neighbors, identifying likely cases, referring and accompanying patients to the hospital, and following up with them when they return home to help ensure that the children do not relapse.

Once at the hospital, only the most severe cases, or cases with additional medical complications such as severe dehydration or vomiting, are admitted to the NRU. The swelling of the soft tissues known as bilateral oedema is the most common criteria the hospital uses to determine whether the patient should be admitted to the NRU or treated as an outpatient, adds CTC Coordinator Blessings Banda.

The majority of patients referred for malnutrition are able to be treated as outpatients, using Ready-to-use Therapeutic Food (RUTF), which can be administered at home. Currently, there are 37 children in CTC’s out-patient therapeutic program. A partnership with the company Two Degrees helps supply RUTF for this program.

In addition to the RUTF distribution, CTC’s supplementary feeding program provides take-home food rations to children suffering from malnutrition, as well as at-risk pregnant or lactating women, and patients who have been discharged from either the NRU or the out-patient program. There are currently 275 patients in this program.

Dr. Rigodon reports that two of the first three patients admitted to the NRU have already been discharged.

*According to World Health Organization 2009 estimates.