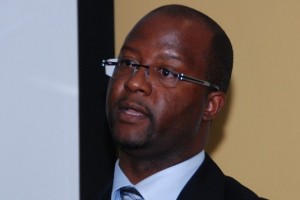 Malawi Government security guard, who was deployed to Bakili Muluzi, has found himself in an awkward situation for being used by the former president’s son, Atupele Muluzi.

The bodyguard sustained a broken leg during a political whistle-stop tour organised by Atupele.

Atupele admitted using his father’s State security guards during the fracas that ensued on January 29 at Bvumbwe when some thugs ambushed him, arguing that he is entitled to State security because he is the son of the former president.

He added: “Even if today I am walking in the streets and I am being attacked, I have every right as a citizen to be protected by the police and secondly as son of the former president. This was a serious security threat against my life; so, BCA [officers] had rushed to protect me.”

But the Malawi Law Society has trashed his argument, saying Atupele does not deserve State security because he is an adult and member of Parliament who is conducting political rallies and, as such, should have his own security detail.

Atupele’s use of his father’s State guards has affected one guard, Bennet Mponda, who is admitted to Queen Elizabeth Central Hospital in Blantyre for sustaining a broken leg.

He was injured when a vehicle on the convoy hit him.

“During the fracas, my leg was broken. I was supposed to go to the theatre on Wednesday [ two weeks ago], but due to the accident that occurred near Blantyre Water Board, my appointment was changed to Friday [last week],” Mponda was quoted in the press this week.

While Atupele insists that as a son of former president, he is entitled to use the BCA guards for his security, MLS says Atupele’s use of his father’s State guards is an abuse of public resources.

Argued MLS secretary Jabbar Alide in an interview on Tuesday: “Atupele is the son of the former president. He is not a minor. He is a Member of Parliament and is busy campaigning. He is now an adult and does not need to get security from his father.”

National police spokesperson Davie Chingwalu said it was not proper for the police guards deployed to the former president to be used by the son.

“The guards were deployed to the former head of State and it is not proper for them to be used by the son for political campaign,” says Chingwalu.