It has just been reported through Zimbabwean media that many Malawians are seriously injured when a Nyali Luxury Coaches bus they were traveling in side-swiped with a Mazda 323 some 20 kilometres outside outside Musina town on Monday.

The incident occurred along the N1 highway, and the bus was reportedly traveling from Johannesburg to Malawi via Zimbabwe. 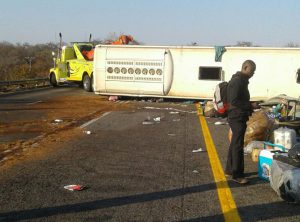 Witnesses said the accident occurred 2 am and that several passengers had broken limbs, including bus driver.

“The injured have been taken to Musina hospital for treatment. We are arrived at the scene shortly after the incedent. No deaths were reported yet, though many passengers incurred serious injuries.

“Indications are that the bus trailer side-swiped with a small vehicle when was trailing in the opposite direction, and it veered off the road and landed on its side partially blocking the road, “said a witness.

The witness further added that the accident could have been a result of overloading.

Musina police spokesperson, Constable Dakolo Ramagweda confirmed the incident saying she was yet to get more details.

The N1 highway has become a death trap for many Zimbabweans and citens from countries north of the Zambezi River.