Barely 24 hours after Joe Biden’s inauguration as US President, a Republican lawmaker, GOP Rep. Marjorie Taylor Greene has filed articles of impeachment against Joe Biden, alleging abuse of power by Biden from his time as vice president.

The newly sworn in Rep. from Georgia, who has supported QANON conspiracy theories and criticized the 25,000 National Guard deployed to Washington D.C. to protect the presidential inauguration, took to Twitter to make her announcement.

“Iâ€™ve just filed articles of impeachment on President Joe Biden, we will see how this goes,” Greene said.

She then immediately used her announcement to raise money for an “Impeach Joe Biden Fund.” 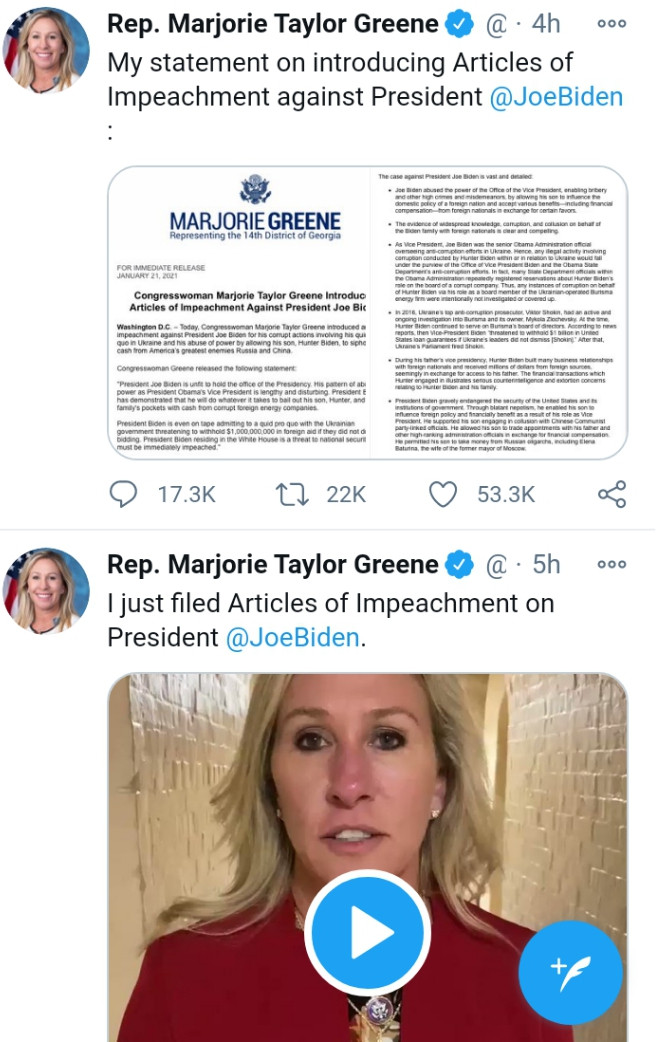 In a press release, she accused Biden of “enabling bribery” and “blatant nepotism” by utilizing his son Hunter Bidenâ€™s position on the Ukrainian energy company, Burisma.”President Joe Biden is unfit to hold the office of the Presidency. His pattern of abuse of power as President Obama’s Vice President is lengthy and disturbing,” she wrote in a statement Thursday.

“President Biden has demonstrated that he will do whatever it takes to bail out his son, Hunter, and line his family’s pockets with cash from corrupt foreign energy companies.” She added 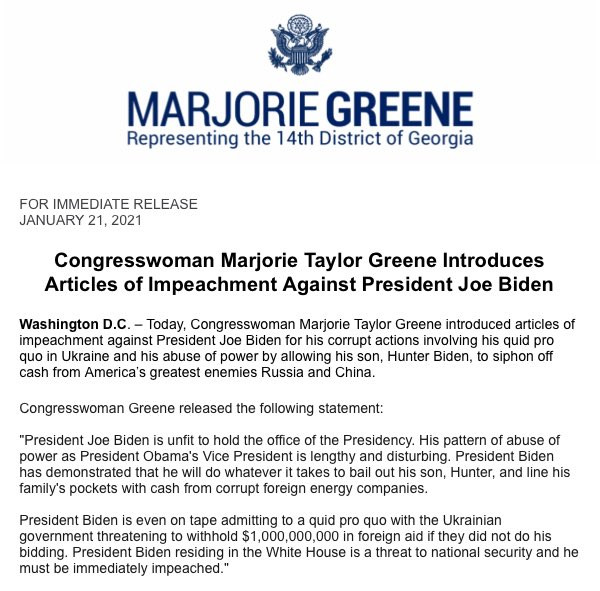 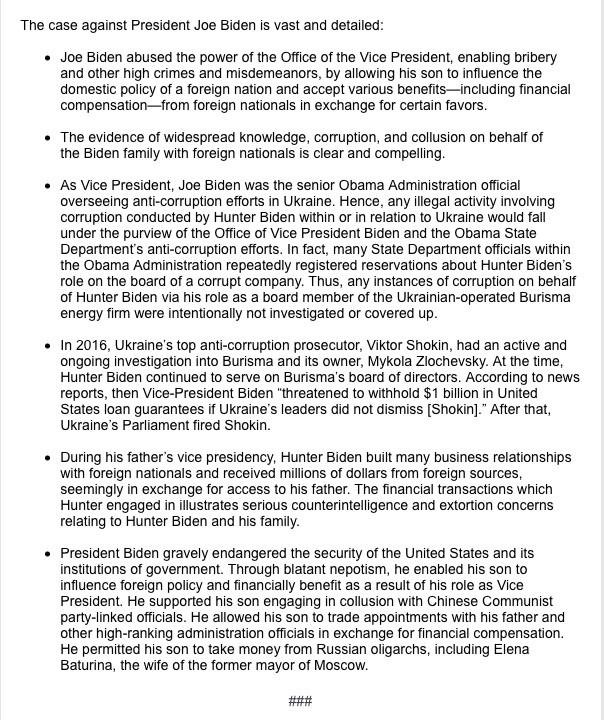 Republicans in the Senate after months of investigation last year found no evidence of wrong doing from Biden.

Greeneâ€™s articles of impeachment are not expected to be taken serious as the house is controlled by Democrats.

Greene announced last week, just hours after the Houseâ€™s historic second impeachment of President Trump, that she would bring articles of impeachment against BidÂ She took to Twitter Thursday to say the “inauguration looked like a one party military state takeover with 30k troops.””People were told not to go & flags were planted to show the fake support,” she claimed. 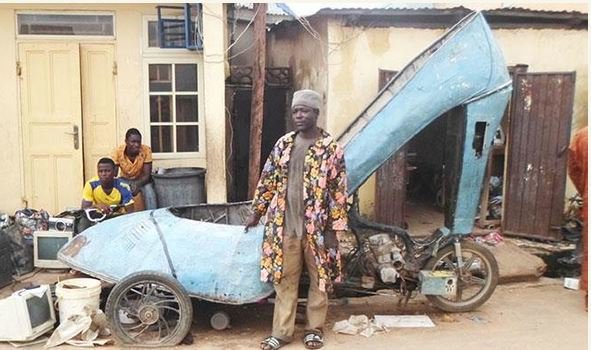 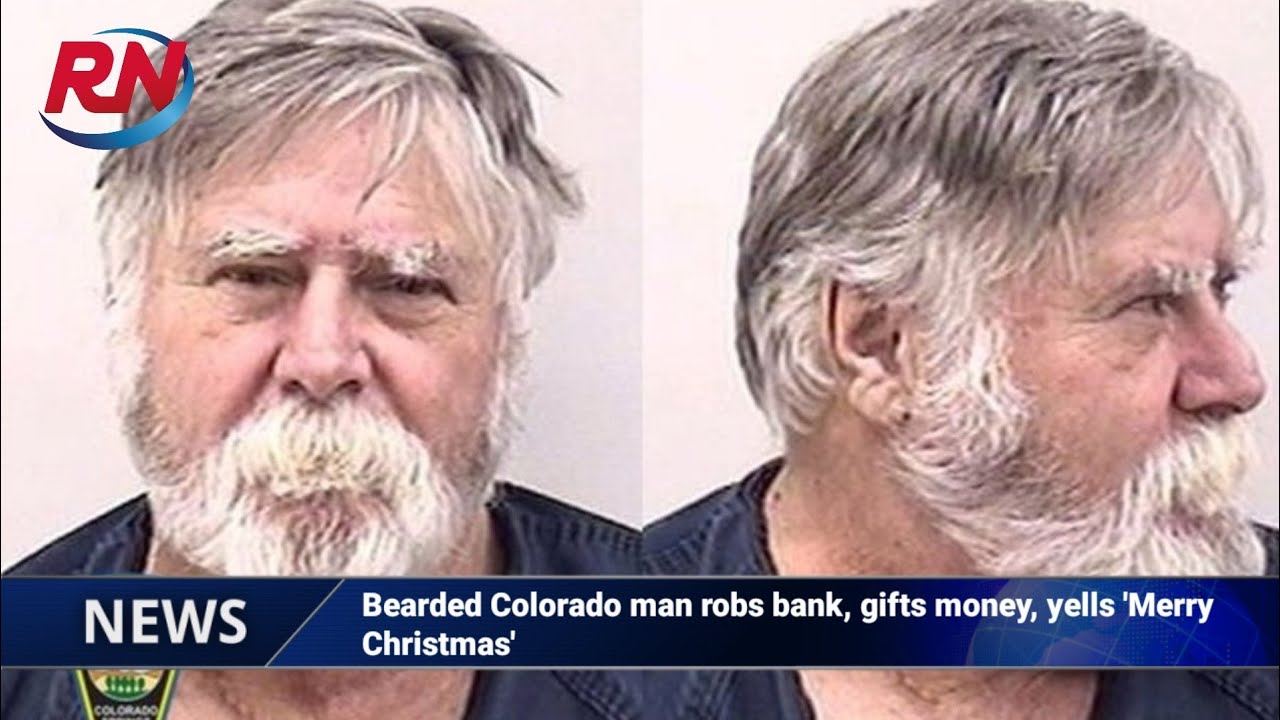 Man with White Beard Robs Bank, Throws all the Money in the Air and Shouts â€˜Merry Christmasâ€™