Condoms Can Be Female | Malawi 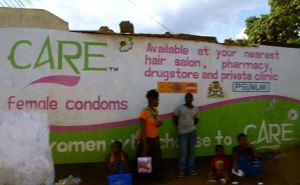 As a student in an all-girls’ high school, I’ve had my share of lectures on the perils of sex: STDs, unplanned pregnancies. I’ve also learned how to protect myself: condoms. But wait a minute — who’s the one wearing the condom? Women are supposed to use their sex-ed knowledge to make sure guys wear them.
While this equation may have a decent chance of working in developed countries, it has proven to be a disaster in developing countries — like Malawi — where there is poor education for girls and HIV/AIDS is the leading cause of death among women. Then I heard about condoms women could wear themselves. Disaster relief may be on its way.

In concept, the female condom is an awesome idea. Women can take the initiative to protect themselves against STDs, no longer placing their safety and survival in their partner’s hands. After using female condoms, women in Malawi have reported feeling more powerful and better able to negotiate safe sex. The U.S. Agency for International Development even found that men who refused to use condoms were willing to have their female partners wear their own. And these condoms are effective: several studies have proven they reduce the risk of a woman acquiring HIV from an infected partner by over 90%.

Ever since the United Nations Population Fund (UNPFA) introduced female condoms into Malawi a few years ago, there has been a growing movement to integrate them into developing countries around the globe. In the President’s Emergency Plan for AIDS Relief, U.S. Congress endorsed them. NGOs have been bringing female condoms to beauty salons and family planning clinics in most of Sub-Saharan Africa. Prevention Now, among other prominent health campaigns, has reported how effective the condoms can be.

Unfortunately, the citizens of the countries aren’t necessarily as excited as the NGOs and the UN. Packages of female condoms languish on Malawi’s salon shelves, dusty and untouched. In Sub-Saharan Africa, distribution is slow: one condom for every 300 women per year. The female version doesn’t even come close to the yearly number of male condoms supplied: 18.2 million female to 2.4 billion male.

There’s clearly a gap between the positive potential of female condoms and their lack of popularity. The organizations supplying and distributing them face several challenges. For one thing, the condoms aren’t cheap. In fact, they are 10 times more expensive than male condoms and, to a cash-strapped government, they might not seem like the savviest investment. There are social obstacles too. In Malawi, the government fears female condoms will give women too much sexual freedom and power.

Since the condom seems complicated and awkward to use, myths and misinformation have been spreading as fast as scourges through villages in Malawi and Zimbabwe. There have been rumors that female condoms could get stuck in the stomach or the womb and even that they’re laced with HIV. As the condoms have been marketed to prostitutes and single women, married couples and those in stable relationships have deemed them “unsuitable.“ The bad rap slows down production and promotion.

Those who believe women should take control of their own health and sexual safety aren’t giving up. The key to overcoming obstacles is education — dispelling the rumors and getting the truth out. Empowering women and girls to protect themselves against AIDS protects the overall health of their countries.

Isabel DeBre is a high school sophomore. She loves learning about global and humanitarian causes and is so excited to be a young voice in Care2?s public conversation on the issues that will affect her generation for years to come.

(Visited 14 times, 1 visits today)
Previous articleNo diesel in Malawi so on to Zambia
Next article2009 Improved economic conditions in Malawi: Progress from a low base

A Nigerian man was left in distress after being...

TEXAS -Two brothers are in jail in Hidalgo County...
FaceofMalawiNEWS