MALAWI: Women’s Education the Path to the Presidency 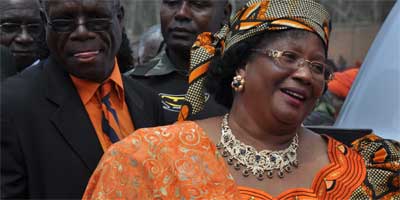 “Regardless of what we face, we need to forge ahead, we need to keep going. For us, it is a responsibility that we have in order to push our fellow women forward.”

On an elegant veranda adorned with a red carpet, Malawi’s Vice President Joyce Banda recalls how her childhood friend Chrissie Mtokoma was always top of their class and how she struggled to beat her. But now decades later Banda is a likely contender for the country’s presidency in 2014, while Mtokoma lives in poverty.

Banda tells parallel narratives contrasting her own upbringing with that of Mtokoma’s. “In the village school, Chrissie was first in her class, all the way to standard six (grade eight),” she tells IPS. “I was always number two or three, always fighting to beat her. But I couldn’t.”

Later, both girls were accepted into prestigious secondary schools. But after just three months, Mtokoma was forced to drop out.

“Chrissie’s uncle couldn’t pay for a second semester,” Banda says. “That was it for Chrissie. She went back to the village and into a vicious cycle of poverty, ignorance, early marriage, and then early motherhood. By the time I finished school, she had maybe five children. And today, Chrissie is where I left her.”

Banda maintains she was only able to stay in school thanks to the middle-class income her father earned working as a policeman. “So I went on, finished, and now I am vice president of this land,” she tells IPS. “Chrissie, she is locked up in the village, in poverty. And that makes me angry. Why am I here and she is not?”

As Banda entered adulthood, these childhood memories drew her attention to the benefits of education, and especially economic empowerment, to which she has dedicated much of her life.

In recent years, Malawian women have made significant gains in their struggle for full gender equality. Women are increasingly represented in national politics, for example. Malawi’s May 2009 federal election saw the proportion of female Members of Parliament rise from 14 percent to 22. And though a minority, it is not difficult to find women’s names among the ranks of corporate board members.

Yet women in Malawi remain disproportionately affected by poverty. In 2004, the National Statistics Office found that while only 25 percent of the country’s households were headed by women, they accounted for 58.4 percent of the country’s poorest homes. Moreover, women in Malawi remain significantly under-represented in areas of economic decision-making.

Banda and other leading women argue that the key to addressing these problems is to put more of the country’s money in the hands of its mothers.

Seodi White, national coordinator for Women and Law in Southern Africa, recalls her involvement in the country’s first marches for women, which were held in the late 1990s. More than a decade later, she argues that there is still much work to be done.

Even small amounts of money can create life-changing opportunities for the country’s most disadvantaged women, White says. She describes the results of an experiment her organisation led in a village in Mangochi District. Women were given roughly 110 dollars and left to do with it as they wished.

“We found out that these are not idle hands,” White says.

One woman made sweets out of sugar and sold them to nearby schools. Another baked and sold small cakes. And a third invested in a tobacco operation. The women made enough to keep their small businesses going, and invested excess earnings in purchases that benefited their families; blankets for their children, iron sheets to improve a dwelling’s thatched roof, and household items such as salt and sugar that previously were only provided by their husbands.

“This kind of power can create a level of decision-making at the family and community level that can have cascading effects on the country,” White emphasises.

She points to studies by financial institutions such as Bangladesh’s Grameen Bank, which, time and again, have shown that women are significantly more likely than men to invest in areas that alleviate poverty such as health, education, and business improvement.

“Women are trained to care for others,” she reasons. “Very few women would just use money for their own personal gain.”

At the side of the road in Blantyre, a group of women selling scraps of plastic discuss what they wish for their businesses. At the top of everyone’s list is an investment or small loan.

Cecelia Goba, 40, and Ellen Mawuwa, 35, say that they would use funds to import and resell goods from neighbouring countries such as Mozambique.

“I would buy clothes and shoes outside this country and sell them here,” Mawuwa says. “We have friends in such businesses and they are doing quite fine.”

A number of non-profit organisations are active in Malawi supplying the sort of micro-loans made famous by the Grameen Bank and Nobel Peace Prize winner Muhammad Yunus. And the vice president’s newly-formed People’s Party recently launched an initiative called Orange Achievers, which aims to maximise the economic potential of Malawian women.

But supply cannot meet demand. And as Mary Malunga, executive director for the National Association of Business Women, explains, there are a host of other challenges Malawian women must overcome if they are to excel in the professional world.

“Women need to work 10 times harder than men to prove that any job that a man can do, a woman can do too,” she explains. “Women, due to perceived social and cultural roles, are not respected when they are in leadership positions.”

Malunga, a successful businesswomen herself, offered a few words of advice.

“To get to where I am today, it took what I call the three Ps: patience, perseverance, and prayer,” she says. “You need to persevere through all kinds of challenges and obstacles which, at times, will make you feel like you will never reach your intended destination.”

“You might get pregnant, and that would be the end of it,” White explains. “Most girls don’t realise the kinds of difficult decisions that some of us had to make to reach where we are.”

And at the vice president’s compound in Blantyre, Banda reiterates that economic empowerment is the path to education and prosperity. But she stresses that this does not mean anybody should wait for a handout.

“My advice to younger women is that we have a moral obligation to make it,” Banda maintains. “Regardless of what we face, we need to forge ahead, we need to keep going. For us, it is a responsibility that we have in order to push our fellow women forward.”