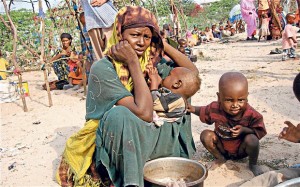 The charity says the international community waited too long to respond to famine in East Africa last year.

Oxfam has launched a £23m ($36m) emergency appeal to help reach more than a million of the most vulnerable.

A BBC correspondent says refugees fleeing fighting in northern Mali are adding to the problem.

Launching its appeal, Oxfam said that malnutrition rates across Chad, Burkina Faso, Mali, Mauritania, Niger and northern Senegal are hovering between 10% and 15%, and in some areas have risen beyond the emergency threshold level of 15%.

It says that more than one million children in the Sahel region are at risk of severe malnutrition.

In parts of Chad, Oxfam says, some villagers are digging up ant hills to gather grain that the ants have stored.

“Millions of people are on the threshold of a major crisis,” said Mamadou Biteye, Oxfam Regional Director for West Africa.

“All signs point to a drought becoming a catastrophe if nothing is done soon. The world cannot allow this to happen. A concerted aid effort is needed to stop tens of thousands dying due to international complacency.”

He added: “We witnessed last year the situation spiralling out of control in East Africa as the aid community failed to act swiftly. The worst can be avoided and thousands of lives will be saved if we act now. It’s that simple.”

BBC world affairs correspondent Mike Wooldridge says that recent fighting between rebels and the army in northern Mali has caused more than 100,000 people to flee their homes – half of them crossing into Niger and other countries that are already hard-pressed.

In January, Oxfam and Save the Children said that thousands of people in East Africa died needlessly from famine last year because the international community failed to heed early warnings.

Previous articleSub-Saharan Africa fails to Meets Access to Clean Water Goal Ahead of Time
Next articleIn Malawi when ‘Life’ gets tough, it gets banned

Social media users are being trailed by a lady...

Long, agonizing periods of sleeplessness and discomfort have traditionally...
FaceofMalawiNEWS