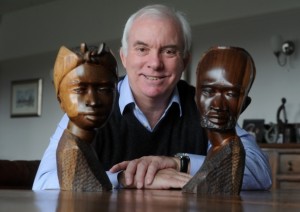 A teacher who has dedicated 25 years of his life to improving educational facilities in one of the world’s poorest countries is celebrating reaching the £250,000 fundraising mark.

He set up his own charity, the Zikomo Trust, with his fundraising efforts building classrooms and libraries and providing medical and educational supplies.

Mr Brindley’s love affair with Africa began in the 1970s when, having studied African History at university, he went work in Zambia. In 1981, he and his wife moved to Malawi as part of a team set up to establish a new school.

Mr Brindley said: “Malawi is known as ‘The Warm Heart of Africa’ because the people are so friendly despite being one of the poorest nations in the world.

“Africa has given me 14 years employment, a wife, four lovely children, a host of friends and wonderful memories.

“I felt that I should give something back. I set up pen pal links, raised funds for scholarships and organised the first of many socio-cultural visits to Malawi.

“Since then we have raised over £250,000 and sent over 200 tonnes of educational and medical equipment.”

Mr Brindley, from Sandal in Wakefield, said his proudest moment was returning to Kamuzu Academy, the school he helped to set up. His saddest moments have been hearing about former pupils who have died young of Aids.

Malawi has been in the headlines because of pop star Madonna’s recent failed plans to build a girls school, and her subsequent run-ins with the authorities.

Mr Brindley said the star had achieved “many good things” but poor planning had led to her losing credibility.

He added: “I may be no global superstar, but the school and I have a deep understanding of the support this country needs and have worked hard to establish successful partnerships.”