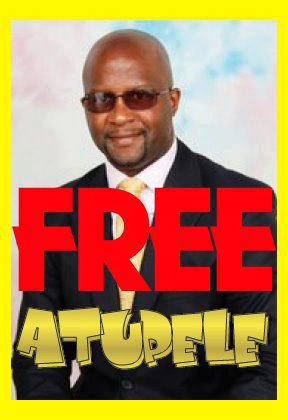 Machinga North East parliamentarian Atupele Muluzi, who was admitted to Mwaiwathu Private Hospital in Blantyre after catching malaria at Maula Prison in Lilongwe, has been discharged around noon today but amid tension.

The tension arose from differences between the hospital staff and Atupele’s followers over the presence of United Democratic Front (UDF) members who had thronged the premises and had been singing praise songs since morning.

When news spread that Atupele would be discharged on Tuesday, UDF diehards clad in party cloth were seen flocking to the hospital as early as eight in the morning. Women camped at the main entrance while men were within the premises.

As the clock ticked 10 in the morning, his father– former president Bakili Muluzi– arrived at the hospital to cheer up the son. His arrival saw, women singing on top of their voices accompanied by drums and they shifted to the hospital’s exit side.

As Muluzi was in the hospital for almost 30 minutes, his vehicle was parked at the very entrance to the reception, forcing vehicles which were bringing and ferrying patients to park at a distance.

UDF faithful queued up along the entrance immediately after Muluzi’s departure, waiting for Atupele to be discharged. But the queue, which had snaked into the reception area, did not please authorities at the hospital who pleaded with them to leave the area.

The authorities further asked the party members to stop their singing and go out of the premises considering that some patients were still in hospital. But this did not go down well with some of Atupele’s sympathisers who started exchanging words with the officials.

As tempers flared high, the hospital staff threatened that they would discharge Atupele using the backdoor. But this infuriated further the party loyalists who finally decided to defy all the orders and queued up straight into the reception area again, to welcome him.

They even parked the vehicle meant to ferry him in the otherwise restricted area, which was about three feet from the entrance to the reception.

Atupele came into the limelight when he was arrested last week on suspicion that he precipitated riots in Lilongwe. Angry residents had burnt down a police unit and vehicles parked around following disruption of a UDF rally. He is currently on police bail.