In rural Africa, solar power is increasingly beating grid-fired infrastructure in the race to bring electricity to those who lack access, figuring prominently in a number of recent humanitarian efforts—among them, a Peace Corps effort to improve conditions for women at a local health center in Malawi.

Malawi—the African country bordered by Zambia in the northwest, Tanzania to the northeast and Mozambique on the east, south and west—is hot and sunny, even during its rainy season, making it a prime candidate for solar power. 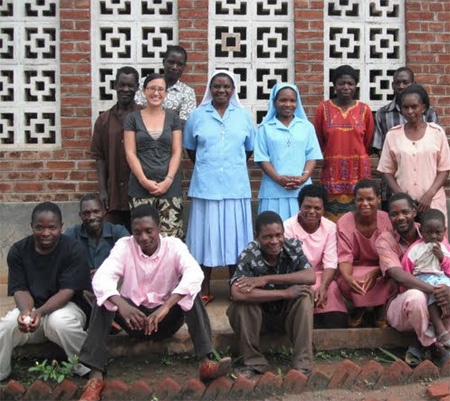 Peace Corps volunteer Allegra Panetto of Haworth, N.J., (pictured above with fellow health center staff) has been working with a local health center in the eastern part of the country that delivers over 60 infants a month, but only has lights in its labor ward and out-patient room. Many of these infants are born in the middle of the night, and Panetto recognized that sitting in the dark, waiting to get into the labor ward, was putting mothers-to-be in unnecessary stress. Why not put that sunny climate to work in lighting up the waiting room, and the rest of the center, too?

Panetto worked with the Peace Corps Partnership Program (PCPP) to raise the cash for the solar array, which will soon be installed at the clinic. In order to receive funding through the PCPP, the community made a 25 percent contribution to the total project cost, and outlined success indicators for the project. According to the Peace Corps, this helps to ensure community ownership and increase the chances of the project’s long-term sustainability.

Similar examples of solar reaching rural areas of the continent aren’t hard to find. For instance, a partnership between a chemistry professor at the University of Southampton in the U.K. and a former educator at the International School in Lusaka, Zambia, has resulted in solar power digital projectors bringing cutting-edge science to rural Zambian schools. And in the small community of Tsumkwe, Namibia, a hybrid solar-diesel system—installed in 2011—currently supplies all public buildings and 100 households with round-the-clock power.

Beyond the smaller-scale efforts of NGOs and other such entities, the African continent in general is making great strides in establishing a green economy, according to Achim Steiner, executive director of the UN Environment Program.

Whether solar power will leap-frog grid-fired infrastructure across Africa as a whole remains to be seen—but the outlook certainly looks sunny.