DPP in a move to make Peter Mutharika Leader of Opposition

Malawi’s former ruling Democratic Progressive Party (DPP) has petitioned Speaker of Parliament Henry Chimunthu Banda, demanding a fresh vote for the post of leader of opposition in the House and have earmarked Peter Mutharika for the post. 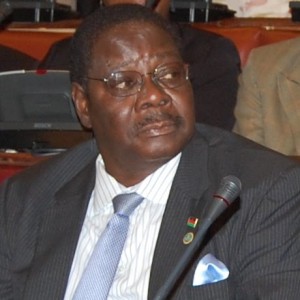 Leader of DPP in Parliament George Chaponda and Chimunthu Banda confirmed the development on Monday.

In an interview, Chaponda argued DPP’s request is within the provisions of the law.

“I wrote to the Speaker last week that we should be allowed, as opposition parties, to elect our own leader. We want the vote to be between ourselves and the MCP who are sitting in the opposition,” he said.

Chaponda said as DPP, they have just moved into the opposition; hence, the need for the party and those in opposition to agree on who will lead them in Parliament.

He said DPP does not have a candidate in mind, dismissing speculation that party acting president Peter Mutharika is aspiring for the position which has remuneration equal to that of a Cabinet minister. DPP has about 50 MPs against MCP’s 30.

Chimunthu Banda said he is still looking at the matter before he can come up with a position.

Tembo said he would only comment on the development if the matter is raised in Parliament.

Part 2 (3) of Parliamentary Standing Orders adopted in 2003 define the leader of opposition as: “The parliamentary leader of the largest party, elected by parliamentary membership, which is not in government or in coalition with a government party, and who is recognised by the Speaker as such.”

This will be the second time DPP is trying to wrestle the mantle from Tembo. The first time was in November 2009 when DPP, then a ruling party, managed to back an internal MCP rebellion to deny him the position which ended up being given to Dowa West MP Abele Kayembe before the court overturned the decision.

DPP, which registered a landslide victory in the 2009 Presidential and Parliamentary Elections, became an opposition party in April this year after the death of president Bingu wa Mutharika.

The then vice-president Joyce Banda, who fell out with Mutharika and was expelled from DPP, took over in line with constitutional order, a development that made her People’s Party (PP)—which has never won an election—taking over governing chores in Parliament. PP’s rise to power is a replica of how DPP became a ruling party without contesting an election in 2005 after Mutharika ditched UDF to form the new party.

In an earlier interview on April 28 2012, former Speaker of Parliament Sam Mpasu argued that Tembo would continue serving as leader of opposition regardless of DPP’s strength on the opposition benches.

NIGERIA - Unknown man has been electrocuted while trying...
FaceofMalawiNEWS