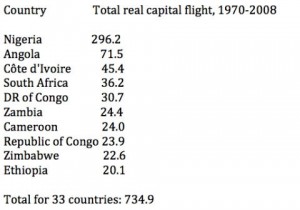 The Africa Economic Outlook 2012 released at the start of this year’s African Development Bank annual meeting in Arusha says reversing this significant outflow of capital could finance the continent’s development.

According to the report, if the capital had been reinvested in Africa with the same level of productivity as that of actual investment, poverty levels would have been cut by four to six per cent every year between 2000 and 2008.

“African countries could as a group have reached the Millennium Development Goal of halving the 1990 level of poverty by 2015, an objective they will not achieve on the current rate of poverty reduction,” it notes.

The saved capital could also go into increased investment in social and economic infrastructure, the report says, asserting that international cooperation is crucial in reversing this flow of African cash.

Africa should continue to improve domestic governance and eliminate the practices that foster capital flight, it adds.

The study calls on the international community to help the continent identify and repatriate stolen wealth and suggests the use of international instruments such as “Stolen Asset Recovery Initiative” (StAR).

“Without an international coalition for the reversal of capital flight, Africa alone will not succeed due to the reticence of some countries benefiting from these practices,” it reads.

On human development, the research finds sub-Saharan Africa had the lowest aggregate level of human development indicators in 2011 but had the second fastest annual increase between 2000 and 2011.