The International Monetary Fund (IMF) has said government remains on the “driver’s seat” in the design and implementation of the national budget, dismissing public perception that the fund has influenced the content of the government budget.

Meanwhile, the fund says it is in the process of preparing “comfort letters” to Malawi’s other development partners who have requested such letters to enable them release aid to Malawi even before the IMF approves a programme for the country. 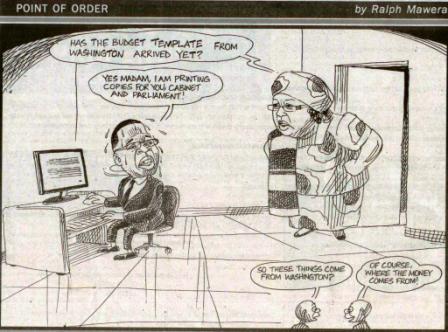 IMF Resident Representative in Malawi, Ruby Randall, told The Daily Times on Tuesday that the new Extended Credit Facility (ECF) arrangement was requested by the Malawi government and is designed to help the authorities achieve the country’s medium-term goals.

“So it is the Malawian authorities who are in the driver’s seat,” said Randall.

Randall’s remarks follow assertions by opposition Democratic Progressive Party (DPP) spokesperson on finance, Frazer Nihorya, in Parliament on Monday that the budget was a product and serves the interests of the IMF.

Randall said the IMF is only there to assist and advise and not dictate as some people are suggesting.

“Ultimately, the decisions are taken and owned by the Malawian authorities,” she said.

Commenting on the budget, Randall said in the IMF’s view, the budget addresses the country’s pressing near-and medium-term needs and strikes an appropriate balance between the need for fiscal restraint, social support to the poor and improvement of the business climate.

through the 21 percent salary hike for civil servants that should also translate into real wage gains.

She said the proposed salary rate increase was higher than the projected inflation for the year which is at 18 percent.

In addition, Randall said, with increased support from development partners, the budget also encompasses a scaling up of important social protection programmes that target both the rural and urban poor.

“Such programmes include: public works programmes that create jobs while helping to develop the country’s infrastructure; school feeding programmes and bursaries to help nourish and educate students and also prevent student attrition; and cash transfers to the poorest and most vulnerable segments who are unable to work,” she said.

On the letters of comfort to enable other donors start releasing their aid to the country, Randall said the Fund has indicated its willingness and intention to provide the letters, also known as Assessment Letters, to the development partners who have requested such letters.

“The fund is in the process of preparing those letters. The mission team’s first day back at headquarters was just yesterday [Tuesday], but the team is doing its utmost to prepare and issue the letters in the shortest amount of time possible, and has informed both the authorities and development partners that the letters are soon forthcoming,” said Randall.

She said the idea of the letters is to share the fund’s assessment of the authorities’ economic policies and help expedite the disbursement of resources by development partners.

An IMF mission team last week reached staff-level understanding with the Malawi government on an economic programme for the fiscal years 2012/13–2014/15 that could be supported by a new ECF arrangement in the amount of about US$157 million.

Randall said the successful passage of the budget in Parliament will help pave the way for approval of the new ECF programme by the IMF’s Executive Board in July 2012 “since the budget is well-structured and consistent with the goal of restoration of macroeconomic stability”.

Two motorcycle tax operators are battling for their lives...

A Police officer failed to hold back his emotions...