1. Fooling Malawian youths that they will be taken to South Korea, Dubai and Kuwait for modern day slavery

2. Taking no tangible action to protect Lake Malawi when Tanzania is making advancements to steal our lake.

3. Rotting maize when Malawians were dying for it

4. Devaluating the kwacha and the cost of living becoming very high

5. Distributing sand instead of fertilizer for FISP

7. Awarding of contracts without following procedures

8. Buying ministers cars when the hospitals had no drugs

9. A lot of unnecessary foreign trips when the country run out of money

10. Distribution of 10 kgs of maize flour when charitable organizations exist in the country

11. Insulting the opposition on podiums at the expense of tax – payers money

12. Social insecurity where people have been robbed and have their private parts cut, butchered.

13. Abusing the state run MBC and degrading of its productions

14. Being the most mobile president in the history of Malawi within a short period of time gaining her political favor than her countries economical
development

15. Termination of contracts with no valid reasons or political affiliation differences wasting more of taxpayers money

16. Over spending with billions of Kwacha and failing to account for a lot of taxpayers money within a year

17. Being the puppet to the west who cannot make her own decision than being remote controlled by the western countries

19. Attacking the media for writing or reporting the ills of your government

20. Closure of learning institution due to financial problems.

21. Wasting taxpayers money on the treason case
when Malawians lavished with poverty 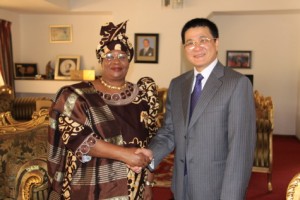 Cost of Chinese aid to Malawi