Six tons of cocaine seized from a home-made submarine

(CNN)The U.S. Coast Guard seized 12,000 pounds of cocaine worth an estimated $181 million when it intercepted a semi-submersible vessel in the eastern Pacific Ocean last month.

The 40-foot long homemade vessel was spotted July 18 by a U.S. Navy aircraft, which called the crew of the Coast Guard cutter Stratton to a spot 200 miles south of Mexico, the military organization said.

Four men were taken into custody and the Coast Guard discovered 16,000 pounds of cocaine aboard. 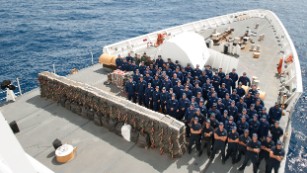 Six tons of cocaine were removed while two tons were left on the sub to help balance it as the Stratton tried to tow it to shore.

But the homemade vessel took on water and sank. It went down in 13,000 feet of water in international waters.

The Coast Guard said the bust was the largest ever semi-submersible interdiction in its history and it was the first time one of its ships had recovered two subs on one patrol. The California-based Stratton also seized 5,400 pounds of cocaine in June.

Previous article
Easy way to make a girl fall in love with you after phone conversation
Next article
MESSI LOSSES HIS TEMPER, GRABS A BLACK PLAYER’S THROAT