An inferno which engulfed the compound of a business man plying fuel business at Chitipa Boma killed five people and seriously injured a toddler.

Business man, Adamson Mubanji, who has been illegally selling petrol and diesel in huge quantities for years, turned some of his boysŌĆÖ quarters, which are semi-dethatched from his dwelling houses, as fuel storage facilities.

During the fateful day, late afternoon, Friday, Mubanji ŌĆśs brother, Frahah was transferring petrol from jerry cans to bigger containers when some drops of petrol splashed to a burning charcoal burner igniting the flames.

According to Kondowe, no attempt was made to put the fire out by hundreds of villagers from GHV Mkombanyama who watched helplessly as flames and smoke willowed to the sky, amid deafening blast sounds from drums.

ŌĆ£Any attempt to put out the fire was too risky because the flames were spreading at high speed,ŌĆØ he explained.

Frahal, Robert Chiona and Maria Mnkhodya, wife to the business man, who was taking a bath when the accident occurred, were burnt to ashes.

Kondowe said six year old Grace Mubanji and Nebert Panja, 30 were rushed to Mzuzu Central Hospital where they were pronounced dead on arrival while two year old, Eliness Mubanji is battling for her life at Chitipa District Hospital.

Medical report from the hospital indicated the deceased died of suffocation and serious burns.

It was bizarre to see burnt people being squeezed in sacks to the hospital no wonder, those who could not control their sorrow shed tears.

Besides killing the people, the fire also destroyed property whose value is not yet known but runs in millions of Kwacha.

Business man Adamson Mubanji disappeared soon after the accident occurred and is still at large.

Houses of residents adjacent to the scene of the accidents also became indirect victims as a crowd of people who were trying to safeguard property from houses which did not catch fire began looting.

This is the third incident for people to be killed in such circumstances in Chitipa District.

The incident has not gone down well with Chitipa police who has been advising fuel vendors to find safe storage facilities for their commodity but it seems the advice has been landing on deaf ears.

Meanwhile, police have warned that they would start confiscating all fuel sold illegally and drag owners to court.

Chimphepo said MERA will only issue licenses to vendors whose storage facilities are safe and away from residential areas.

ŌĆ£It is shocking that innocent lives are lost due to somebodyŌĆÖs carelessness in storage of fuel. As police, we can not condone that,ŌĆØ said Chimphepo.

All the deceased were laid to rest at Mwanjalati Village in Chief Mwaulambia, the home of the business man.Mana 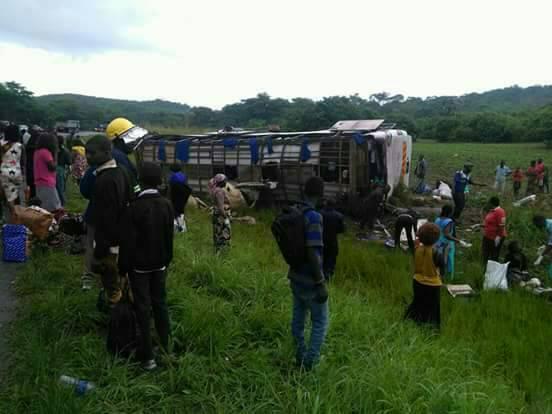 Bus Travelling from Zambia to Malawi Involved in an Accident

KasambaraŌĆÖs case back in court