The idea that African countries have long been independent and free to pursue their own destinies seems obvious to young Africans across the continent. Yet, the everyday reality often feels far from that. Some 50 to 60 years after independence for many countries, Africa’s fortunes seem to still closely aligned with developmental support and financial aid from former colonial rulers, the United States, the European Union or multilateral institutions like the World Bank and IMF. 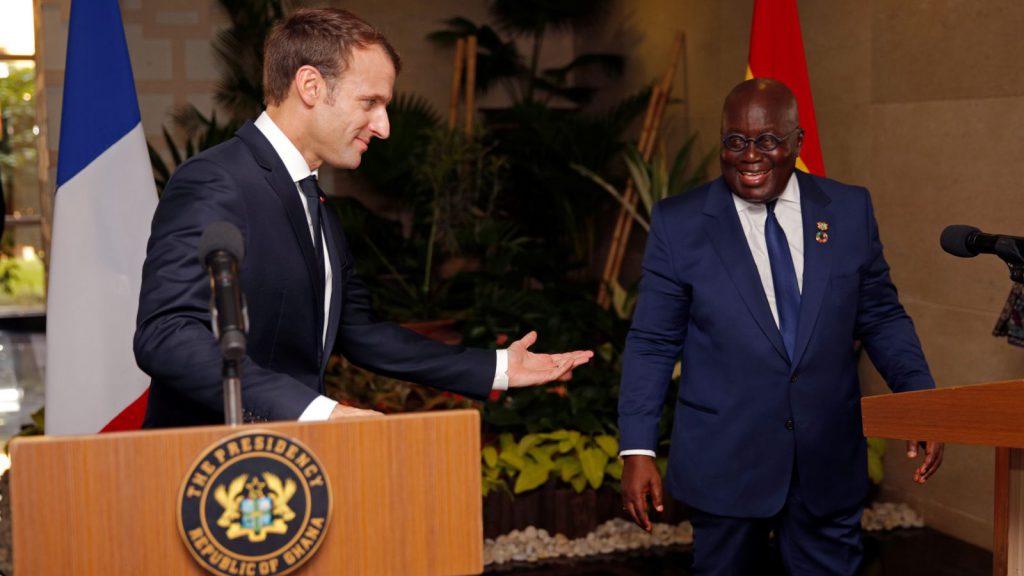 After the most recent rounds of African debt forgiveness and rising commodity prices over the last decade, that conversation seemed to have shifted somewhat. There are now more calls for investment and trade rather than aid. But with the crash in commodity prices and many of the usual long-term structural problems laid bare again, the calls for support from wealthy nations comes up again. It seems deeply ingrained. However, few African leaders, regardless of their personal beliefs, ever publicly question the idea that international support is needed for development or, in the worst cases, day to day running of their

This is probably why young Africans on social media have been heaping praise on Ghana’s president Nana Akufo-Addo for his response to a question at a joint press conference in Accra with the visiting French president Emmanuel Macron.

The question by a local journalist was about whether France was going to strengthen its “support” for other African countries aside its former colonies where the majority of French aid is spent. Ghana won independence from Britain in 1957. After jokingly tossing the question between each other, Macron replied with fairly standard mundane rhetoric.

But when it was time for president Akufo-Addo to speak, knowing fully what he was about to say was controversial, he began by saying: “I hope that the comments I am about to make will not offend the questioner too much and some people around here”, the latter part widely interpreted as directed to his much younger counterpart.

“We can no longer continue to make policy for ourselves, in our country, in our region, in our continent on the basis of whatever support that the western world or France, or the European Union can give us. It will not work. It has not worked and it will not work”, he stressed.

A visibly uncomfortable Macron fidgeted, appearing unsure which side of the room to turn his gaze as his African counterpart stopped short, saying while aid is appreciated, he wouldn’t be propositioning it.

“We have to get away from this mindset of dependency. This mindset about ‘what can France do for us?’ France will do whatever it wants to do for its own sake, and when those coincide with ours, ‘tant mieux’ [so much better] as the French people say…Our concern should be what do we need to do in this 21st century to move Africa away from being cap in hand and begging for aid, for charity, for handouts. The African continent when you look at its resources, should be giving monies to other places…We need to have a mindset that says we can do it…and once we have that mindset we’ll see there’s a liberating factor for ourselves,” his rising tone and demeanor demonstrating his passion for this subject.

While Macron might have been caught off-guard by the frankness of president Akufo-Addo’s response it was in fact in line with some of his own blunt comments while speaking about Africa’s future, while visiting neighboring Burkina Faso, a couple days earlier.

Sub-Saharan African countries are the recipients of 25% of global official development assistance, according to the OECD.

Videos of the answer have been viewed by hundreds of thousands of times already and shared by many social media users across the continent. One user describing it as “probably the most powerful message in recent times coming from an African leader.”

Others have said, it showed the difference between Anglophone and Francophone African countries which are still closely aligned to France. For example, all of Ghana’s Francophone neighbors are members of the CFA franc, the currency of 14 African countries. The CFA and its structure, in which the countries, through two regional central banks, deposit 50% of foreign exchange reserves at the Bank of France in exchange for fixed-rate euro convertibility, are facing their most significant criticism in decades.

Macron has defended the CFA, but only to the extent of pointing out that separate currencies would still need their own forex backing.