ZAMBIAN PROPHET NOW READY TO GO TO UKRAINE TO END THE WAR!

Africa’s Number One Known Clergyman Prophet ISAAC Praise of Zambia has finally accepted calls by millions of Zambians and other people across the continent who requested him to travel to Ukraine to end the bloody, unjustified and unprovoked war by Russan Invaders. 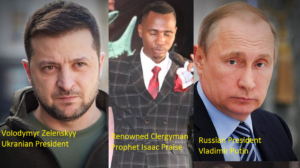 Addressing journalists in Monze this morning, Prophet Isaac said once he steps his feet in Ukraine, the bloody and devastating war which the world is witnessing will be over as he serves a God of Peace who never fails.

The Man of God said its unacceptable for Christians to sit idle and watch people being killed for no reasons in Ukraine therefore the need to travel to that war torn country to end the war through prayers.

The Prophet added that the war in Ukraine cannot end by Western Military Intervention but through prayers. He warned that if Russia is forced to leave Ukraine through military means, the world will experience nuclear world war 3 which will claim not less than 100,000,000 people. “The best way of ending that war is by me travelling to UKraine and offer prayers”, he said.

Previous article
Meet All 8 Children of Veteran Actress, Patience Ozokwor, her husband, Her first daughter is a carbon copy (Photos)
Next article
CHAKWERA MEETS MALAWIAN HEALTH WORKERS IN US

A 42-year-old man identified as Laison Chitumbwi has been...

A Mufulira businessman, Badani Mbewe, was attacked and robbed...
FaceofMalawiNEWS