South Africa’s freedom fighter and Former President Nelson Mandela is an icon respected all over the world.

He is one of the most respected people ever to step into this world and after his demise, he is still regarded as a hero.

With all the accolades he has during his time one would expect his past to be perfect as well.

However, this is not the case when it comes to his College transcript that has leaked.

A transcript belonging to the late Nelson Mandela is circulating on social media.

What people see is shocking as the marks on Papa Madiba’s transcript are miserable.

From the picture, he allegedly failed most courses and it did not go well for him. 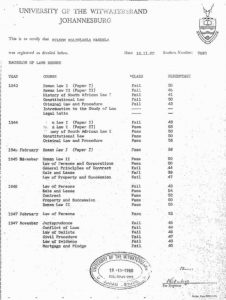 Being the most loved person in the world, people have a million reasons why he failed the courses.

Some blame the Apartheid regime and say that the oppressors failed him intentionally.

In support, others blame the conditions he lived in whilst going to University.

All in all the marks are quite unpleasing.